Tumour Sampling and Large Format Histology – Why Bigger is Better!

The application of large format histology in routine clinical diagnosis is reasonably well established. However, large specimens such as breast, bowel, kidney and prostate are frequently sliced in the dissecting room and processed in multiple smaller, standard size tissue cassettes. Logically, the more samples that are obtained from large tumour specimens, the more reliable the pathology yet protocols for the routine sampling of these tumours often recommend taking fewer samples. Taking a one centimetre block for each centimetre of tumour diameter is often the general consensus with the provision for extra samples to be taken from areas of tumour that may have a different colour, texture or area of suspicion.  Since cancers are the culmination of many complex changes in cell metabolism, tumours are often dissimilar at different sites. These changes termed intra-tumour heterogeneity (ITH) have an uncertain behaviour with often unique and unpredictable tumour patterns. As a result, detection of these changes is often dependent upon the accuracy of tumour sampling by the pathologist.

One of the most common methods of dissecting large tumour samples is the ‘bread-loafing’ technique which is able to determine tumour extent and assessment of surgical resection margins (Figure 1a). However, this method has a high false negative rate if only selected slices are processed (Figure 1b). In contrast, complete circumferential (peripheral and deep margin) assessment allows for complete examination of tumour and the surgical margins (Figure 2a+b). Consequently, this method is superior to ‘bread-loafing’ due to its low false negative error rates. 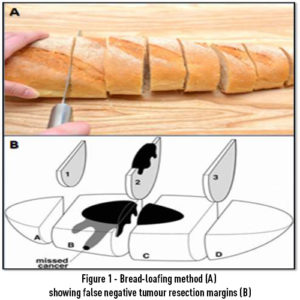 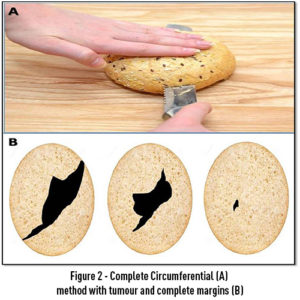 An alternative to the more traditional practices that are used in tissue dissection is the procedure known as multisite tumour sampling, a simple method that clearly improves routine detection of complex changes in tumours. The technique is based on a divide-and-conquer (DAC) algorithm which involves selecting certain areas of the tumour for analysis with the goal that those areas are representative of the entire tumour. This strategy has been used to solve complex problems by selecting the most appropriate cells for examination. This is especially important for large tumours which have a propensity for incomplete sampling (Figure 3a+b). The practice of multisite tumour sampling is carried out by the application of a cutting grid to the slice of tumour in order to obtain multiple tissue cubes, several of which are placed into each standard size tissue cassette. This procedure is cost effective by limiting the quantity of standard cassettes used whilst increasing the number of tumour areas sampled (Figure 3c+d). 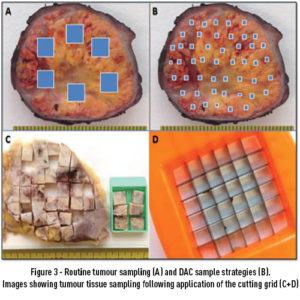 Irrespective of which of these methods are employed for sampling large tumours, the use of standard size processing cassettes and multiple tissue blocks still remains commonplace. Consequently at microscopy, the specimens often need to be pieced together like jigsaws since the stained sections are frequently presented over many slides. The use of large format cassettes alleviates this problem by aiding diagnosis and turnaround times through improvement in visibility as the entire tissue sample can often be viewed on a single slide. Because these large format (Supa Mega) cassettes are capable of holding 10 times the volume of conventional standard size cassettes (Figure 4), they are a more efficient way of assessing large areas of tissue, thereby avoiding the problems of under sampling that often occurs with tumour specimens. This is particularly important in cancer diagnostics since in the early stages, tumour development is often so involved that conventional histology sampling is seldom sufficient to document its complexity. 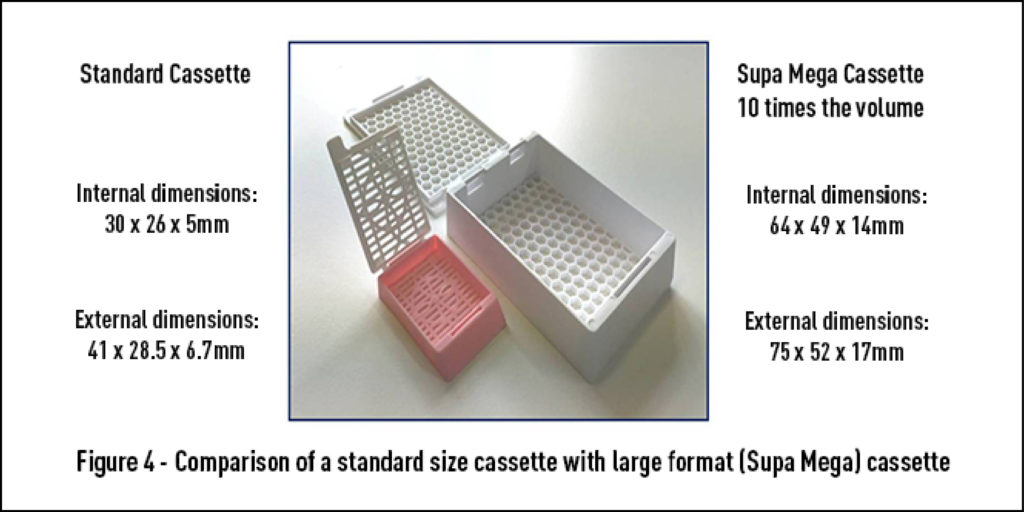 Easily adapted to the needs of the routine diagnostic laboratory, large format histology has become the established method for not only assessing characteristics such as intra-tumour heterogeneity, tumour size, extent and distribution but also for identifying the involvement of surgical margins. The large format technique can be adopted for all tissue types and tumours and the production of digitalized whole slide images is also possible using available scanners. This is especially significant when tumour evaluation of virtual slides is able to offer diagnostic clues to the classification, prognosis and prediction of response of the disease to treatment. Large format histology has proven to be a cost effective method that is able to meet the needs of the modern histology laboratory, particularly in the multidisciplinary approach to cancer diagnosis.