A Brief Perception of Tumour Pathology

Healthy cells are an essential requirement for normal bodily functions and depending on cell type they may be uniform or vary in both size and shape. When required to produce further normal healthy cells, they are able to divide in a well-disciplined and organised manner. In disease processes, that life cycle balance becomes disturbed by certain biological changes which often allow malfunctions to develop. When cell division becomes uncontrolled, abnormal development occurs resulting in the formation of new growths (neoplasias) or tumours. Tumour production exceeds the rate of cell death and continues indefinitely regardless of normal control mechanisms. The rate of tumour growth depends on a supply of nutrients (such as blood) and on the number of dividing cells as opposed to the number of cells that have already divided or differentiated. Other mechanisms such as enzyme proteases have also been implicated in the growth and progression of tumour cells since these enzymes have the ability to degrade certain extracellular components such as those found in the basement membrane.

Classification of a tumour

Tumours are broadly classified into two main categories: benign or malignant.  Benign tumours usually comprise a single mass containing cells that closely resemble normal ones (Figure 1).  They are generally symptomless, have well-defined margins and invariably remain at the site of origin. The reason for this is that the surface interaction molecules that hold tissues together are able to keep benign, normal appearing cells localized to appropriate tissues. Consequently, these masses can usually be excised completely. Benign tumours are seldom fatal unless they arise adjacent to and press on vital structures or secrete excess amounts of biologically active substances such as hormones. 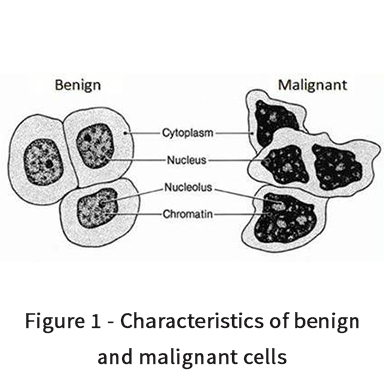 Cells that appear normal may become cancerous by way of abnormal changes such as hyperplasia and dysplasia (Figure 2). Hyperplasia is a common pre-neoplastic response to a stimulus that results in an increase in the reproduction rate of normal looking cells.  In dysplasia, however, while the cells may have some of the cytological features of malignancy they are not cancerous. Although hyperplasia and dysplasia are often initial stages in the development of cancer, they are both reversible. 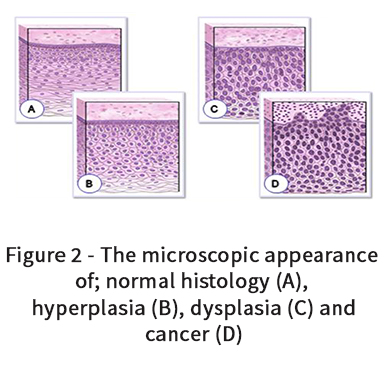 One of the most severe types of premalignant change is the condition termed carcinoma in situ where abnormal cells remain within the epithelium. Since the cells have not breached the basement membrane, they have not invaded neighbouring tissue. However, carcinoma in situ remains a vivid reminder of the need for action since it has a high risk of developing into an invasive malignancy.

Cancer is a genetic disease that is caused by changes to genes that control the way our cells function, grow and divide. Cancer cells are not only resistant to signals that promote cell death (apoptosis) but are able to multiply in the absence of growth factors usually required for the proliferation of normal cells. Cells become cancerous following an increase in mutations, particularly in the growth-promoting genes that are responsible for controlling cellular division and proliferation. In order for these mutations to induce cancer, they must occur in dividing cells so that they may be passed on. Mutations such as those often inherited genetically from parents can also occur during a lifetime as a consequence of environmental agents such as tobacco smoke and ultraviolet radiation.

Cancer cells can be distinguished from normal cells by microscopic examination. Unlike benign tumours, malignant cells have an increased variation in nuclear and cell size and shape (pleomorphism) and in the density of nuclear staining (hyperchromasia). They also have an atypical cytology with an increase in the nuclear to cytoplasmic ratio and are usually less well differentiated than normal or benign tumour cells (Figure 3). 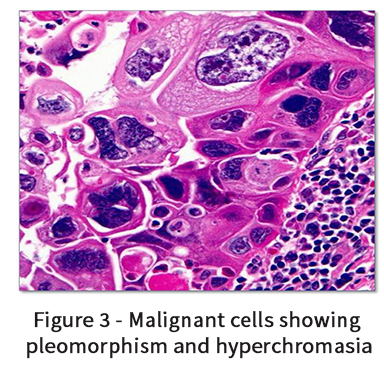 Malignant tumours often have poorly defined margins with no obvious capsule. Cancer cells also invade surrounding tissues by breaking through the basal laminas that define the boundaries of tissues. By producing proteases, they allow invasion of these tissues and often metastasize to distant sites via the vascular and lymphatic systems. Without a suitable blood supply, tumours are unable to spread effectively. However, by stimulating the secretion of a tumour angiogenesis factor, cancers have the ability to grow their own blood vessels. Nonetheless, production of new vessels is often unable to keep up with increased cellular proliferation and cell death or necrosis is frequently seen central to a tumour.

Grading and staging of cancer

When cancerous tumours are diagnosed in the histology laboratory, their cellular appearance (grading) and extent (staging) are assessed whenever possible. Grading of tumours is a way of classifying cancer cells microscopically and is dependent upon what the cancer cells look like when compared with normal cells. Tumours are usually described as low or high grade based on their degree of differentiation, how quickly they are growing and dividing and how likely they are to spread. Conversely, tumour staging is dependent on several factors such as the size of a tumour and the extent to which it has spread. The TNM staging system is commonly employed where T = size of a tumour, N = number of lymph nodes involved and M = metastatic spread. As well as other factors, clinicians are able to use the cancer stage and grade to help plan the most appropriate type of treatment, consider how cancer might respond to it and determine the expected outcome or prognosis. The ability of malignant tumours to metastasize and invade normal tissues makes cancer such a difficult disease to treat. In order for the best chances of successful treatment with progression-free survival, early diagnosis of cancer remains paramount.