Oral Cancer and the Distinguished Doctor

Born somewhere in mainland Europe on the 6th May 1856, this patient was the first of many children. When he was just four years old, his father’s textile business failed, and the family moved to a cosmopolitan European city to begin a new life. At university, he studied medicine and had his first publication at the age of 21. Graduating with an MD four years later, he distinguished himself as a histologist, neuropathologist and clinical researcher specialising in neurological disorders. Having studied the importance of cocaine in the treatment of conditions such as mental fatigue, he was curious to learn about the effect it had on the nervous system. When his scientific paper ‘On Coca’ was published in the summer of 1884 he was already abusing the drug and became dependent on it for almost 20 years.

In February 1923, he presented with a tumour on the right side of the roof of his mouth. An excision biopsy of the lesion was taken but due to a sudden onset of bleeding, he was promptly admitted. For months after he was treated with radiotherapy but because the oral lesion persisted he had decided to consult another surgeon. By this time however, a large ulcerated area near the maxilla and a palpable mass close to the right collarbone were present and further surgery was recommended. The first operation carried out was a right partial neck dissection with ligation of the carotid artery. This was followed six days later by a second operation where excision of the tumour, maxilla and part of the mandible was performed. The patient was fitted with an oral prosthesis to separate the nasal and oral cavities.

Over the next 16 years, he underwent more than twenty additional procedures which included multiple biopsies and regular cauterisation of suspicious areas at the original biopsy site. He endured continual pain and died in London on the 23rd September 1939 assisted by his physician who had injected him with a fatal dose of morphine.

Most oral cancers (which include mouth, tongue and throat cancers) are squamous cell carcinomas, the largest group in the head and neck cancer category. Over 12,000 people are diagnosed with oral cancer each year in the United Kingdom and number more than a quarter of a million worldwide. Regrettably, the cancer is on the increase and incidence rates are projected to rise by a third over the next 20 years. Although the most important contributory factor for oral cancer is tobacco, the disease increases fifteen-fold when it is combined with alcohol. In addition, the abuse of stimulants such as cocaine has also been shown to cause cancerous lesions in the oral cavity. For many years, this patient had not only enjoyed smoking cigars and drinking alcohol but was known to have abused the drug. There is little doubt that his lifestyle contributed to his disease and this had continued long after the diagnosis of cancer had been made.

Management of these cancers is usually a multidisciplinary approach and treatment in the early stages can result in minimal disfigurement. However, if the disease is discovered in the later stages, a neck dissection is often necessary, and this may require oral or facial reconstruction. In addition, oral prostheses may be necessary for assisting with eating and speech. Ligation of the external carotid artery during surgical removal of the tumour is not generally obligatory but in this case, was carried out over concerns about possible haemorrhage due to a history of bleeding.

What about our mystery patient?

This patient had endured multiple additional surgical procedures over many years probably as a result of inadequate removal of the tumour in the original excision biopsy. The persistence and progression of the disease suggest that the original diagnosis was a squamous cell carcinoma although this cannot be corroborated because all the original histology slides and blocks are missing. Interestingly, the right partial neck dissection was carried out even though there was never any recorded evidence of recurrent disease in the neck or distant organs. In view of the poor prognosis of such a tumour, it is surprising that this patient not only lived for many years following diagnosis but worked continually until his death.

So, would this patient have been treated differently had he attended hospital today?

Nowadays, once the presence of the cancer had been confirmed, the degree to which the tumour had developed would have been determined by histological grading and staging. These are probably the best indicators of tumour involvement and would allow the planning for further surgery, treatment and determination of prognosis. However, having survived for 16 years following diagnosis of his cancer, the doubt remains whether his prognosis would have been more favourable had it been discovered today.

Who was this famous member of the medical fraternity who worked so diligently up until his death?

The answer is Dr Sigmund Freud, Austrian neurologist and founder of psychoanalysis. 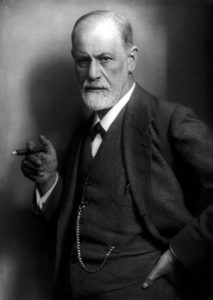 Freud’s published work ‘On Coca’ on the value of cocaine in the treatment of pain, mental fatigue and other medical conditions had placed him on the brink of international acclaim.  Products containing cocaine such as lozenges, pastilles, pills, potions and wine had flooded the market. In the meantime, Freud had introduced the drug to his friend Karl Koller, an ophthalmologist who discovered the numbing capabilities of cocaine on his lips during a drug-induced session where they had ingested it. Koller later demonstrated the potential of cocaine as an anaesthetic and reputedly earned the nickname ‘Coca Koller’.

Meanwhile, a pharmacist by the name of John Pemberton had jumped on the band wagon and produced his own version of coca wine. In 1885 however, owing to a ban on the sale of alcohol, he changed the formula and sold it under the name Coca Cola. Shortly afterwards, illness and bankruptcy forced him to sell the rights to the drink and they were bought for a few hundred dollars by Asa Griggs Candler, an American businessman. Candler later became mayor of Atlanta; Pemberton died in poverty and addicted to morphine.

The rest is history!