The risk of developing cancer depends on many factors, such as age, genetics and the environment. Although a high proportion of cancers are accounted for by avoidable lifestyle choices, such as alcohol consumption, smoking and diet, for many of them, the causes remain largely unknown. Nonetheless, the prelevance of risk factors and the incidence of cancer are diverse, differing by both region and county across the globe. Sporadically, a large number of cancer cases, occur in a group of people within a defined area, over a short space of time. These outbreaks are often referred to as cancer clusters and include; the leukaemia outbreak near Sellafield, Cumbria (1968-1955); the testicular cancer outbreak in Fulton County, New York (1982-1984) and the more recent outbreak of blood cancer in Clyde, Ohio (1996-2013). Cancer clusters are statistical events that do not always have a cause and often occur without any obvious carcinogenic source. Consequently, when a cancer cluster is suspected, there is an obvious need to determine if the outbreak is authentic or purely a coincidental event. One such incident that is currently causing significant concern is ocular cancer (uveal melanoma) outbreak in two different locations in North America – Auburn, Alabama and Huntersville, North Carolina (Figure 1). 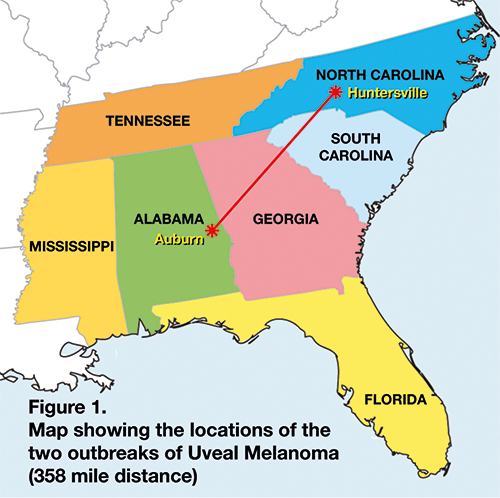 What is Ocular Melanoma?

Ocular or uveal melanoma is a rare malignancy of the eye that generally occurs in 5-6 individuals in every million, representing less than 5% of all melanomas. This cancer arises from melanocytes in the uvea, which consists of the iris, ciliary body and choroid (Figure 2). Melanoma of the skin is one of the most common cancers often diagnosed among adolescent and young adults the median age for diagnosis of uveal melanoma is around 65. Other than it frequently occurs in people with fair skin and light eye colour, there is no known precise cause. Patients with uveal melanoma often have no symptoms and are usually diagnosed during a routine eye test. Although the primary melanoma is effectively treated using radiotherapy, it often returns and spreads to other sites in around 50% of patients.

In 1999, a young woman who had attended the University in Auburn, Alabama became the first reported case of uveal melanoma. She later had her eye removed. In 2001, another young woman suffered from the same fate, as a result of the disease. By coincidence, the second patient had also graduated from the same university, some 11 years earlier. A Facebook page was created by a third patient to highlight the condition, following the discovery of her two friends’ diagnosis of the same rare cancer she had. In reality, what she discovered was that many other patients affected by the disease had also attended the University in Auburn between the years of 1983 and 2001. Medical experts remained baffled after nearly 50 patients were diagnosed with this rare type of cancer between the two locations; Auburn, Alabama and Huntersville, North Carolina.

Although many of the patients received treated at a cancer centre in Philadelphia, it was not until 2015 that an oncologist at the clinic first reported the link between the two outbreaks. When the coincidence first aroused the suspicions of the medical fraternity in North Carolina, they focussed their investigation on four young women, who had lived in the vicinity or had attended Hopewell High School in Huntersville. In April 2017, the state health department initiated further studies and began looking for patterns and trends among the patients. The survey, which included a regional geospatial analysis of the air, soil and water showed that although there were some toxic materials present in the environment, the analysis provided little information on any specific association with the outbreak.

By the summer of 2018, there were 18 cases of uveal melanoma reported in Huntersville and 27 cases in Auburn. In response, the public health department in Alabama together with the University in Auburn, began an investigation among former students and employees. Both units are currently working together with the North Carolina state department and researchers at the Thomas Jefferson University in Philadelphia where many of the patients received treated. However, in October 2018, the study conducted by the Alabama Department of Public Health reported that they did not find the rates of cancer any higher than the number of cases expected. Investigation and surveillance of cancer and potential clusters in other regions are continuing to identify relationships between patients and environmental issues that might help the cause. Research is continuing to identify and understand the genetic basis of uveal melanoma and recent work has focused on the effect of FR900359 (a natural plant compound of the primrose family) on the overactive protein g-alpha(q) commonly found in these tumours. The prognosis for those affected by ocular melanoma is not promising. The survivors of the disease affirmed that they would rather a cure than a conclusion that clarified any regional correlation between the two distinct outbreaks.