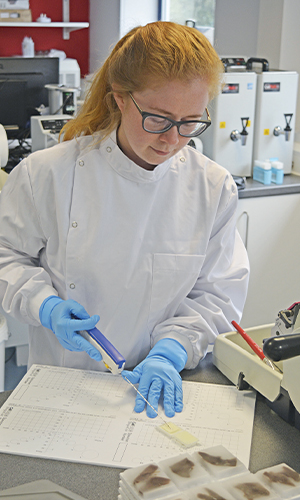 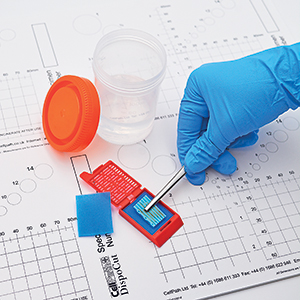 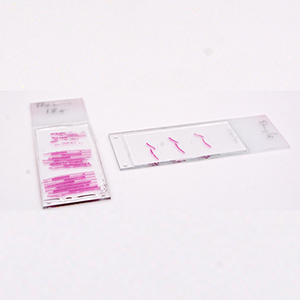 Needle core biopsies are used to minimise patient discomfort whilst still gleaning essential information about an organ. Organs such as prostate, breast, liver and kidney can all be studied using needle core biopsies, thus reducing the need for invasive surgery and extended hospital stays.

Whilst these tiny biopsies are often more convenient for patients, they can create challenges for laboratories where the tissue must be processed and handled extensively. Damage may occur during manipulation with forceps which is required at several stages of standard processing. Their delicate nature creates additional difficulties as the tissue is also prone to breaking during processing which could lead to the loss of valuable diagnostic information. Cores which do contain cancerous cells are even more susceptible due to the high gland to stromal ratio within them.

All of these factors mean that needle core biopsies typically consume a significant amount of time and resources.

In order to ensure fragmented cores do not become mixed, many laboratories choose to process each needle core individually. If biopsies are processed individually then large amounts of resources are required to produce one block for each core, resulting in a bigger workload and slower turnaround times. Some labs prefer to maximise their use of resources and instead process multiple needle core biopsies from the same patient together in the same cassette. If multiple biopsies are processed together, samples can break and become mixed during processing which could lead to confused diagnosis.

Trying to determine the most appropriate course of action will require compromise. Should resource efficiency ever be prioritised over diagnostic accuracy?

To address these needs, consumables suppliers have developed many solutions to reduce manual handling, enhance specimen security and improve efficiency. Occasionally one solution may address multiple aspects. Some solutions may choose to minimise the manual handling risk that can occur during specific processes. For example, mesh processing capsules help to reduce the manual handling required if biopsies require X-Ray examination as they are X-Ray transparent. Simple solutions aimed at physically securing a biopsy include foam pads or tissue paper. These methods will ensure samples remain in the cassette if they fragment but do not address the concern of different cores becoming mixed within the same cassette. More advanced solutions include multi-well cassettes which allow specimen security alongside simultaneous biopsy processing to improve efficiency.

A novel solution to this ongoing compromise has recently arrived in the UK. Launched by CellPath Ltd in September 2019 at the Institute of Biomedical Science biennial Congress, the LUMEA BxChip™ allows multiple needle core biopsies to be processed simultaneously with reduced risk of cores becoming mixed or fragmented.

The BxChip™ consists of a blue, flexible, tissue-like matrix which typically has 6 channels. Wider chips are available containing as many as 12 channels. Each channel fits one core, with chips available to fit 12, 14, 16 and 18 gauge needle cores. Different tissues will typically be taken using different gauge needles with prostate, currently the tissue most commonly used in the BxChip™, taken using an 18 gauge needle. The bright blue colour provides a high contrast background to ensure tissue cores are easily visible. On the surface of the chip are identification markers providing orientation information. The addition of these markers is particularly useful to pathologists as this information is typically lost using other methods because cores are not secured throughout transport and processing. The chip also features evenly spaced 1mm tick marks, aiding with the measurement and reporting of amount of cancer per core.

To fill the BxChip™, cores are laid directly into the channels in the procedure room. Transferring cores straight from the biopsy gun to the chip ensures the biopsies require no further individual handling. Murugan et al (2019) found a significant reduction (more than threefold) in preanalytical and analytical time using the BxChip™. They also found increased specimen security with nonlinear fragmentation completely absent, in contrast to standard processing. This method of cross-departmental work helps a hospital to achieve optimum patient care.

Once filled, the chip is placed into a cassette and transported to the laboratory in a formalin pot. From here the chip can be treated like any other biopsy, albeit a rectangular blue biopsy. The individual cores are now safely held in the chip and the chip can be processed according to size. Throughout processing and microtomy there is no need to adopt any change of process. The benefit being that as many as three sections from each 6-core chip can fit on a single standard microscope slide.

When processed, cores are much less likely to fragment and any fragmentation that does occur will be contained within the same channel. This means that under the microscope there is much more tissue available to view, aiding diagnosis.

The potential savings of resources alone are clear, but when time and tissue availability are also taken into account it becomes clear that the opportunities offered by the BxChip™ are at least worthy of a closer look. That was the attitude held by Dr Mitul Sharma of University Hospital of North Durham.

Prior to release into the UK market, Dr Sharma heard about the BxChip™ during a conference in the USA where the chip is used successfully in numerous hospitals. Sensing an opportunity to improve upon current processes, the team at Durham opted to introduce the 18 gauge chip to process prostate cores. Following a successful trial, they have now fully adopted the use of the BxChip™ for processing all of their prostate biopsies. Here, Laboratory Manager Andrew Munro shares their experience of introducing the chip.

What inspired you to use the BxChip™?

We were definitely looking for an alternative method to what we were using. We were handling samples too many times and increasing our risk of picking up the wrong cassette which meant patient samples could be transposed. That’s what led us to try the chip.

Did you have any issues getting other departments to “buy in” to the use of the BxChip™ with patients?

I don’t know if we were just lucky but Radiology were willing to give it a go. When we were going to try it out for real, I went down to the prostate clinic and talked to the radiologist and explained the new way we wanted the cores presented to us. They seemed quite happy to put them straight into the chip. So at least our Radiology department were quite happy to try this new system that didn’t seem too onerous to them.

Would you say both you and the radiologists found it easy to use the chip?

There’s a bit of a learning curve for the microtomists and the pathologists. Our lab has quite a mix of both experienced and inexperienced staff. The more experienced microtomists were happy with knowing how far to cut into these chips whereas some of the less experienced staff took a bit longer to be confident that they were going far enough into the chip getting the balance right between a full face section, but not too deep.

What sort of savings have you noticed since using the BxChip™?

We worked out that we save £1,400 on consumables per annum. Even though the chips appear costly, we’re now using less consumables such as slides. However, the time saved by the BMS and the Pathologist is probably the biggest saving.

Alongside the savings reported by the team at Durham, significant savings can also be made on the cost of immunohistochemistry (IHC) reagents. Depending on current process, the number of slides produced per case could reduce from six to one. Reducing the number of slides which will be submitted for IHC processing by such a large amount creates potential for huge savings to be made.

Would you say you need a large workload to warrant the chip or is it manageable to implement as a bonus for occasional cases?

We get about 5 prostate cases a week, so we do about 200 a year. We don’t have a particularly large prostate workload but even with that small amount it saves us time. If you had a bigger workload it would obviously save you even more time.

Have you noticed any improvement in the amount of fragmentation since using the chip?

I would say yes. When the prostate cores were placed in our previous 5-well cassette, they had more room to move around and break or separate, but when they go into the channels of the chip, the sponge goes on top of them, resulting in less movement for them to break up. Generally, they are now consistently in one piece.

How do other people react to the chip?

It’s one of those things that people want to see. I’ve had a few different Trusts emailing because they saw Dr Sharma’s poster [at Leeds Pathology 2019] and started asking about the chip. I’ve said to them that if you really want to understand you need to see it in action. There are challenges of course but we had such a nightmare with our old system- it was just open to samples being transposed.

Would you recommend the chip to others?

Yes, I would. Some hospitals embed one core per block leaving them with 10 or 12 blocks which must create a nightmare. If you’re doing 3 levels on each block you’re ending up with more than 30 slides per prostate case- compared with the 4 that we now produce. If they can get to this level of reducing their slide use that would be an even bigger bonus.

For University Hospital of North Durham, the trial of the chip was so successful that it has now been implemented for use with all prostate biopsies. Future work in the UK, supported by CellPath Ltd, will see the 12, 14 and 16 gauge chips also trialled allowing different issues such as breast, kidney or liver to be processed. The UK market is well-positioned to trial innovative methods of time and cost savings, particularly when patients stand to benefit from an increased amount of tissue available for diagnosis. Further studies in the UK will reveal the true cost-saving potential available to the NHS.