Health promotion and disease prevention are two powerful benefits of spending time in the great outdoors. In some countries including the United Kingdom, cost savings in healthcare are often made on the prescription of green activities by the medical fraternity. In one study by Natural England, it was revealed that for every pound that was spent on a healthy outdoor activity, there was a seven-fold cost saving towards the expense of treating conditions like diabetes and heart disease. Regrettably however, there are times when hale and hearty pastimes such as a walk in the park or a hike through the forest can be detrimental to your health.

Consider the insects Ixodes scapularis and Ixodes ricinus for example. More commonly known as deer, sheep or black-legged ticks, they are widely distributed in forests, moorlands and suburban parks throughout Europe and North America. Though most people are generally unaware of the health risks from their bites, one tick-borne disease that is causing a serious public health concern is the infectious disorder known as Lyme disease (Figure 1). 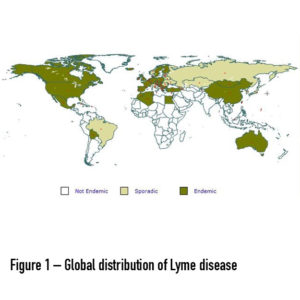 First recognized in 1975 following an unexplained outbreak of juvenile rheumatoid arthritis near the town of Old Lyme in Connecticut, the disease is now the most widespread tick-borne infection in the northern hemisphere. Lyme disease is transmitted through the bite of ticks that are infected with the bacterial spirochaete Borrelia burgdorferi (and more recently Borrelia mayonii). The ticks typically acquire the bacteria by biting infected animals such as deer, sheep and small mammals. The life cycle of the ticks generally last two years, but once the eggs have hatched, they are dependent upon a blood meal at every stage of their development in order to survive (Figure 2). In nearly all recorded cases of Lyme disease, the bacteria are transmitted to humans by bites from the infected ticks. Most of these occur between late spring and autumn since it is not only the peak feeding period of the insects but also the time of year that the general population are more likely to be taking part in outdoor activities. 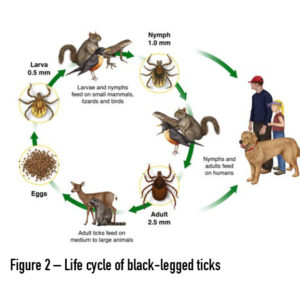 The most common and often only symptom of Lyme disease is a slow growing bulls-eye rash (erythema migrans) which extends gradually outwards from the site of the bite (Figure 3). The rash usually becomes noticeable in the first two weeks following the tick bite and some patients may also experience flu-like symptoms such as a raised temperature and aches from muscles and joints. In its early stages, the disease can be effectively treated with antibiotics. However, if left untreated, more serious complications may arise and these can include paralysis of the facial muscles, meningitis and in some cases, death. 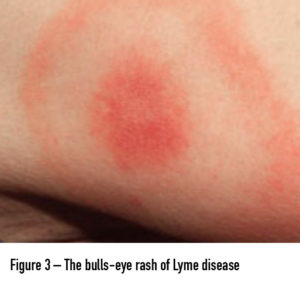 Diagnosis of Lyme disease is usually established from medical history, physical examination and blood tests. Since it may take up to six weeks following the bite for the immune system to make antibodies against the organism, patients with the bulls-eye rash often have a negative blood test result. In many cases, molecular detection of the bacterial DNA in tissue or synovial fluid is often recommended. In the histology laboratory, the Borrelia spirochaetes are Gram negative and are coloured black by the methods of Steiner, Levaditi and Warthin-Starry (Figure 4). The bacteria also stain with Giemsa-type methods and with immunocytochemistry using monoclonal antibodies against the Borrelia species. Direct detection of the spirochaetes is also possible using dark field microscopy. This system utilises a modified condenser which prevents the light from passing directly through the sample, resulting in the spirochaetes appearing bright against a dark background. 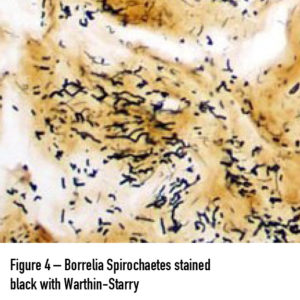 In the United States, Lyme disease has been a notifiable condition since 1991 and the number of people diagnosed there annually is currently around 300,000. In the United Kingdom however, Lyme disease is not notifiable so the true number of new cases each year is unknown. Although figures have shown that several thousand new cases occur annually, this is almost certainly a gross miscalculation. Many high profile celebrities such as the former England rugby captain Matt Dawson, actors Ben Stiller and Alec Baldwin, and the singers Avril Lavigne, Kelly Osbourne and Martine McCutcheon have all suffered from the condition.

Because there are no vaccines available, awareness is paramount in preventing the disease. Wearing appropriate clothing, using chemical repellent and checking for ticks on family and pets are all that may be required whilst on outdoor pursuits, especially in areas of high risk. Lyme disease has recently been portrayed as being more widespread than AIDS and only by taking these sensible precautions can it be prevented from becoming a major public health concern for the nation.