Home News K is for the Kinyoun Stain 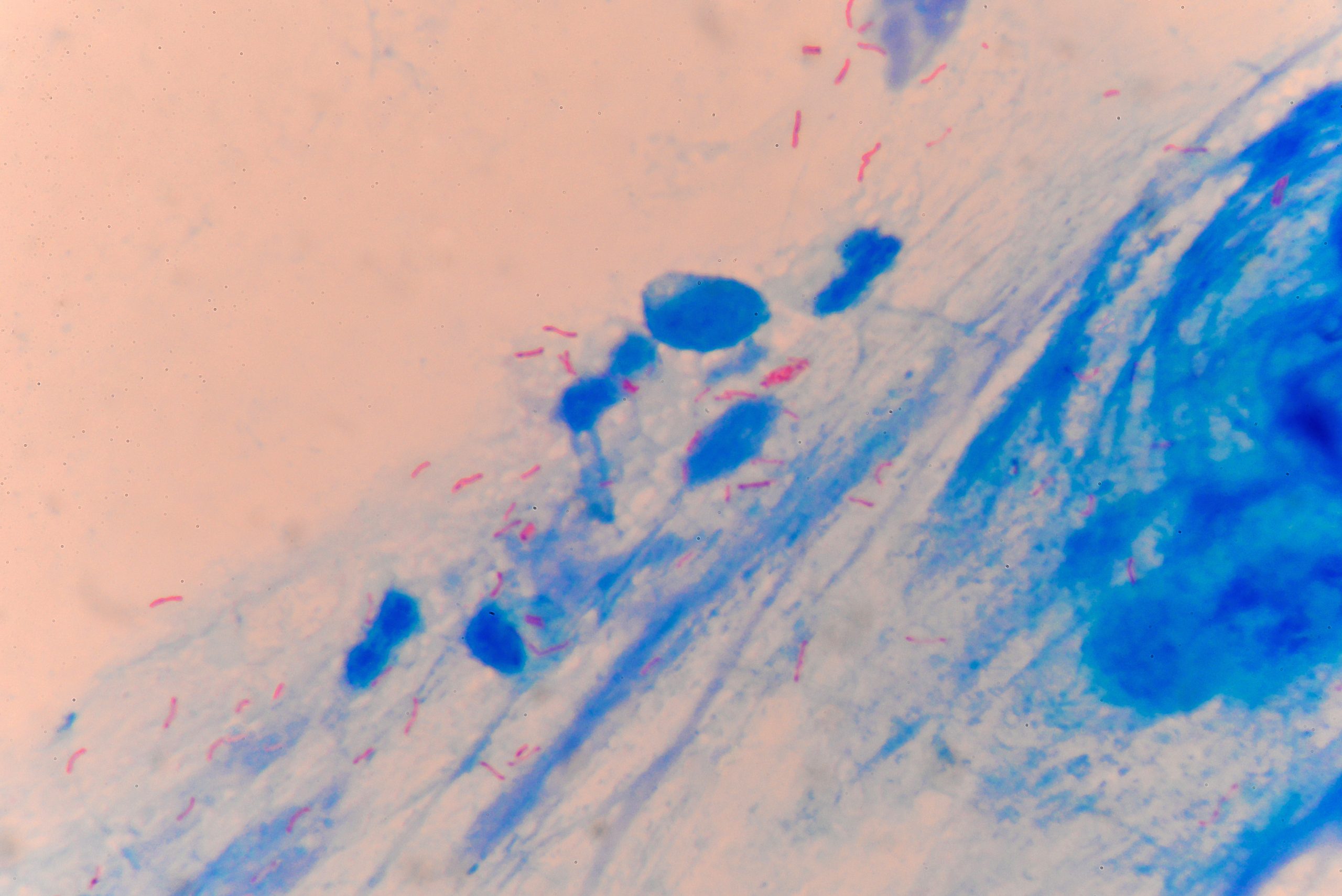 K is for the Kinyoun Stain

Welcome to our A-Z series of staining where today we will be looking at the letter K for the Kinyoun stain.

A variant of a method previously developed by Robert Koch, it was named after the bacteriologist Joseph Kinyoun (1860-1919) who devised it whilst serving under Koch as a visiting scientist. Commonly known as the cold Ziehl-Neelsen, the procedure is used to stain acid-fast bacteria, so-called because they have the unique capacity to resist decolourisation by acid alcohol. This method differs from the conventional Ziehl-Neelsen stain by using a higher concentration of carbol fuschin, thus avoiding any need for heat application during the procedure. Acid-fast stains are essential for staining bacteria that may not be visible in haematoxylin and eosin sections. Although acid-fast bacteria are also weakly Gram-positive in terms of structure, they often stain poorly.

Certain types of bacteria such as Mycobacteria and Nocardia contain a waxy lipid (mycolic acid) in their cell walls and it is this component that allows them to be stained red with acid-fast stains. The property of acid fastness is related to the carbon chain length of the mycolic acid found in any particular species. Non-acid fast bacteria stain blue or green depending on the counterstain employed (see Figure). 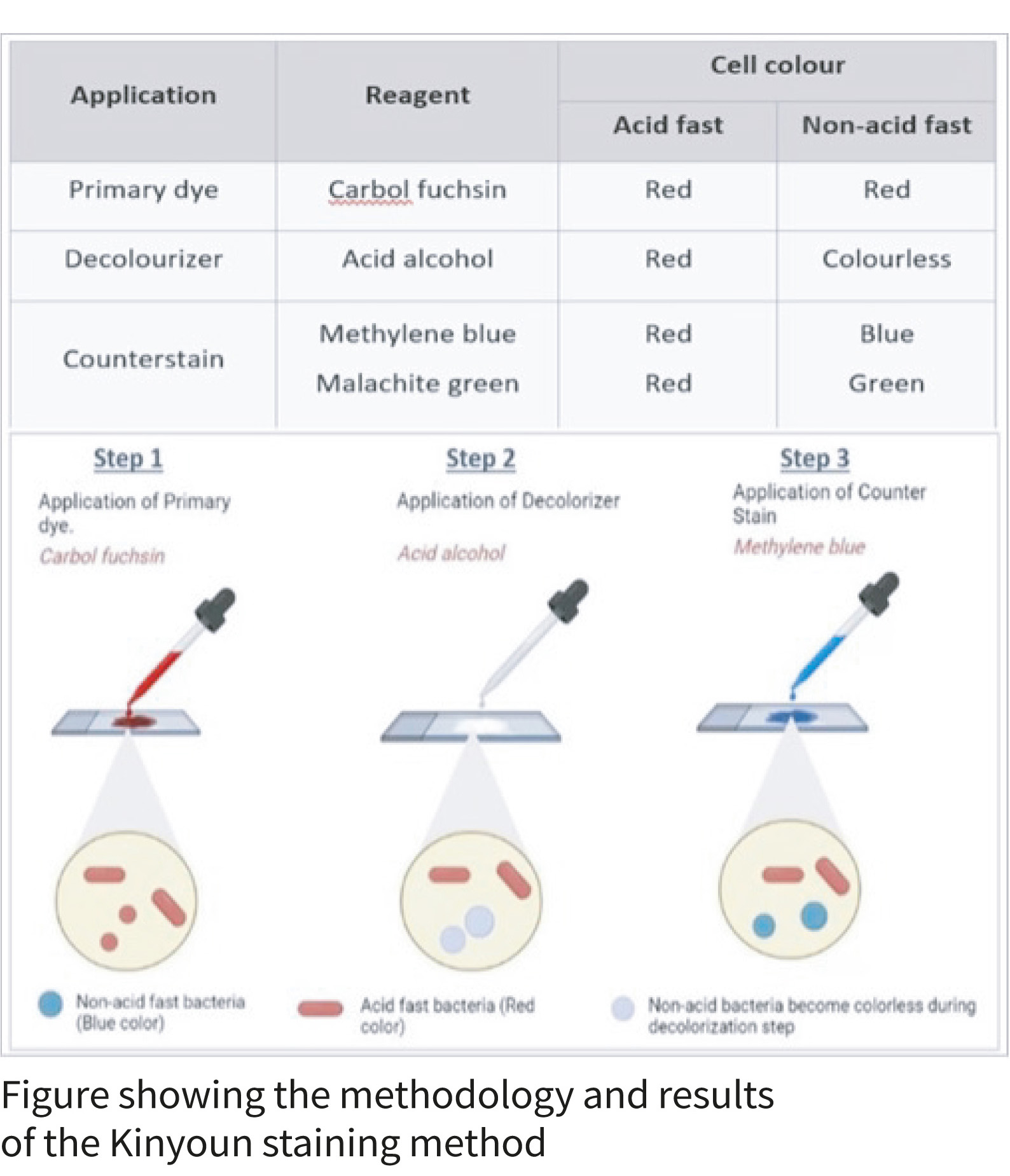 When tissue sections are screened for infectious diseases such as tuberculosis, it is the presence of the waxy component that enables bacteria like Mycobacteria (the causative organism) to retain the red carbol fuchsin stain following treatment with acid alcohol. Although there are no obvious differences between the staining intensities of acid-fast bacteria with the Kinyoun or conventional Ziehl-Neelsen methods, the former has the distinct advantage of not requiring any source of heat. Additionally, the simplicity and efficiency of the Kinyoun method makes it a valuable alternative for identifying acid fast organisms such as tubercle bacilli. Consequently, the Kinyoun method has largely replaced the conventional Ziehl-Neelsen in many laboratories.

Bacteria of the Nocardia genus are found in soil and water and are the causative agent of nocardiosis, an infectious disease that can affect the lungs (pulmonary nocardiosis) or whole body (systemic nocardiosis). Although these organisms are only partially acid fast, the Kinyoun stain can be modified by using a weak sulphuric acid in place of hydrochloric acid in the acid alcohol stage. The sulphuric acid solution does not de-colourise as strongly as hydrochloric acid and this makes it useful for staining bacteria such as Nocardia that are only weakly acid fast. A more recent variant of the Kinyoun staining method has been developed for the diagnosis of leprosy. Because leprosy bacilli are much less acid and alcohol fast than tubercle bacilli, the Fite-Faraco heat-free method has been adapted from the method of Kinyoun. In order to protect the delicate waxy coat of the leprosy bacilli, paraffin wax sections are de-paraffinised using a xylene and peanut oil mixture. In addition, alcohol is removed from both the hydrating and dehydrating stages and the acid alcohol de-colouriser replaced with a 10% solution of sulphuric acid. Following counterstaining, the sections are subsequently rinsed in water and blotted dry before clearing in xylene.

Since most bacteria are non-acid fast, the Kinyoun method is generally less useful than perhaps a Gram stain. However, acid fast stains such as the Kinyoun method and its modifications are extremely useful for positively identifying the causal organisms in infections such as tuberculosis, nocardiosis and leprosy. Similarly, diagnosis of infectious diseases caused by certain Cryptosporidia species and bacteria from the genus Legionella also benefit from acid fast staining as these organisms are often difficult to detect with other routine stains.