Home News E is for Eosin

E is for Eosin

As one of the most commonly used laboratory chemicals, many of you will be familiar with the uses of eosin. Eosin is used to stain tissue sections as part of the extremely commonplace haematoxylin and eosin method used to identify cellular features and aid in the diagnosis of abnormalities found. Eosin specifically is responsible for staining the cytoplasm of the cells pink.

As well as being used as a companion stain with haematoxylin, eosin is also found in the Papanicolaou stain which is used for samples being tested for cervical cancer. When performing this role, eosin is one component of EA50 and stains superficial epithelial squamous cells.

The success of eosin staining is highly dependent on the pH of the reaction. Some structures react more brightly than others to the dye. An excellent eosin-stained section will have different intensities of colour for different structures. A very good way to see if you have an ‘average’ eosin, or an ‘excellent’ eosin is to look closely at the elastic lamina of blood vessel. If the elastic fibres are visible, then you have a worthwhile eosin stain.

You may remember that earlier in the series, in B is for Bluing, we discussed ‘Bluing Artefact’ and eosin fell under suspicion as being a cause of the artefact if the pH was not ideal. This could be explained by considering the variable pH and contaminants of tap water.

You may be less familiar with why eosin works in this way, and some of the interesting history behind this laboratory staple.

There are alternative variants of eosin but the type most commonly used in histology is known as Eosin Y- the Y stands for Yellowish. An alternative dye, eosin B, shares similar properties but has a slight bluish colour rather than yellow.

Now established as an essential item for any laboratory, eosin was invented in 1874 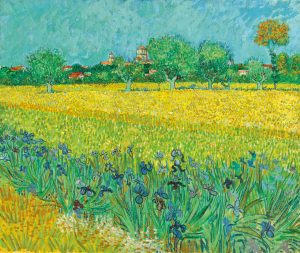 by Heinrich Caro. He based the name of the dye on the nickname of his childhood friend, Anna Peters, nicknamed Eos. Caro (1834-1910) lived and worked throughout Europe and, amongst other accomplishments, was responsible for the invention of eosin, the development of indigo dyes and has an acid, Caro’s acid (alternatively peroxymonosulfuric acid), named after him.

With laboratory use safely established as the most common function for this dye, it may interest you to know that post-impressionist painter Vincent Van Gogh incorporated eosin dye in his painting Field with Irises near Arles. Due to the degradation over time of the eosin molecules, the colour has changed gradually from purple to blue as only darker bromine atoms are left behind.

Read on next time for the sixth in our series and find out what “F” will stand for. Your comments, feedback and suggestions are always welcome.