Home News Disease in the Aftermath of 9/11

Disease in the Aftermath of 9/11 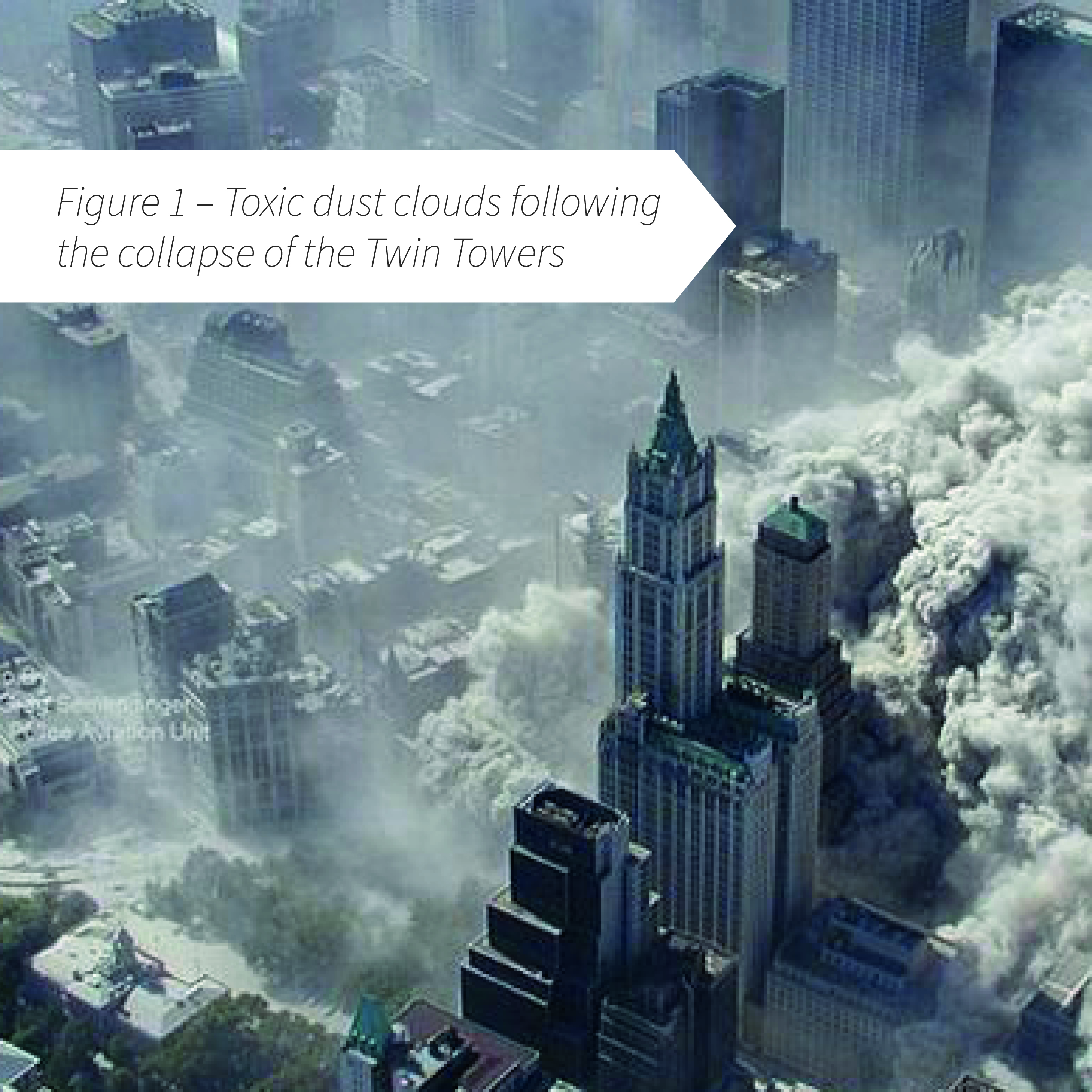 Around 8 am on the morning of Tuesday 11th September 2001, everything appeared normal, on the streets of Manhattan. Sadly, this was all about to change. Within the hour the north and south towers of the World Trade Centre had been hit. By 10.30 that morning, the skyline of New York City had been transformed forever when both towers collapsed under vast clouds of dust that blanketed lower Manhattan (Figure 1). In less than two hours, more than 2,500 people had perished, including several hundred emergency responders. The search and rescue operation at Ground Zero, the area where the World Trade Centre once stood, began with workers carefully removing debris in the hope of finding survivors (Figure 2). Thousands of personnel eventually became involved in the rescue, recovery and clean-up operation during which 1.8 million ton of pulverised concrete and debris, was removed. This waste contained high levels of asbestos dust as well as other toxic agents such as polycyclic aromatic hydrocarbons and dioxins, by-products of the fires which burned around the area for many weeks.

The World Trade Centre Health Registry estimated that up to half a million people in the surrounding areas were exposed, to toxic dust, that fateful day. In the months following the attacks, dust from collapsed buildings continued to fill the air, and many residents and workers were experiencing debilitating health problems. While many of the conditions such as asthma and silicosis were respiratory, others included both physical and mental health disorders. Furthermore, within years of the disaster, many recovery personnel had developed cancers that were believed to have arisen from exposure to the toxins. Although studies have shown that the incidence of all cancers among workers at Ground Zero was not significantly elevated, the frequency of mesothelioma and cancers of the thyroid, prostate and blood were considerable.

Mesothelioma is asbestos-related cancer that develops from the mesothelium, a thin tissue layer that covers many of the internal organs. During the implosion of the twin towers, the asbestos within them was pulverised into fine dust, contaminating the air around the World Trade Centre. Because of the pronouncement from the Environmental Protection Agency that the air was safe, countless responders at Ground Zero were not given adequate respiratory protection following the disaster.  As a result, many were ill-prepared for the toxic dust that blanketed from the site. Within five years of the attack, several responders had already died from mesothelioma, even though the disease commonly occurs several decades following first exposure to asbestos.

Another interesting finding was that many first responders were found to have a pre-cancerous condition called monoclonal gammopathy of undetermined significance (MGUS). This disease often progresses to multiple myeloma and is found among those exposed to known and suspected carcinogens. One of the most common blood cancers in adults, multiple myeloma is often diagnosed between the ages of 65-75 years. Recent studies of recovery and clean-up personnel have suggested an early onset of the disease, occurring 12 years earlier and 1.8 fold higher than the control population. However, by screening at-risk workers for MGUS, it is possible to both monitor and predict the development of multiple myeloma.

Since that fateful day in 2001, more than 1,800 first responders received a diagnosis of 9/11-linked cancers. Studies on the effect of exposure to toxins have on the health of those affected, are continuously being performed. In 2010, the Zadroga act (named after James Zadroga, a police officer and first responder who died as a result of exposure to the toxic dust) recognised that victims of the disaster should be able to receive compensation. The World Trade Centre Health Program and Victim Compensation Fund (VCF) both help provide that support with free annual medical screenings and health care to those certified with World Trade Centre-related illnesses. To date, the World Trade Centre Health Program has provided screenings, monitoring and treatment for more than 70,000 responders and 12,000 survivors that have enrolled on the scheme. However, with around half a million people in the vicinity of lower Manhattan at the time of the attack, it begs the question of why so few people have registered with these programs.

For those who are yet to become ill, they may be unaware that they were at risk. Those who are already ill may not be aware there is a link to 9/11. Cancer clusters are still appearing in many schools, offices and homes that were in the vicinity of the dust that emerged from the collapse. With cancers often having latency periods that extend many decades following exposure to toxic agents, only by screening at-risk populations can monitoring and early diagnosis of these diseases be sustained and successfully treated.