From Body to Block – A Brief History of Tissue Processing

Since the word ‘tissue’ was defined in the late 1700s by Marie Francois Bichat, the father of histology, the advances that have been made in the world of cellular pathology are beyond measure. Though his original work was based on the gross dissection of tissue samples, modern histology with its microwave processing, automation for cutting and staining, microscopy and digitalization of whole slide images is a world away from the primitive laboratories of Bichat. Nonetheless, while these new techniques and discoveries have improved the way that histology has evolved, certain aspects of the science have essentially remained unchanged. Formaldehyde for example was discovered by Butlerov way back in 1859 yet it still remains the gold standard for tissue fixation.

One of the first tasks of any histology laboratory is the receipt, recording and labelling of tissue samples on their arrival. Often termed accessioning, the accurate numbering of specimens is an essential component for the identification of patient samples. Long before the age of the computer, laboratories relied on the hand numbering of samples and request forms prior to recording their entry into the laboratory ledger. Numbered labels were often written in pencil onto small oblong pieces of paper and placed with the specimen in formalin so that they remained with the correct sample throughout.

Once specimens had been successfully numbered and logged, careful examination and selection of tissue samples for processing were carried out in the dissecting or grossing room. Historically, the tissue samples together with their hand-written identification labels were placed into perforated, stainless steel capsules (Figure 1a). Many years later, advancements were made with the introduction of the Tissue-Tek processing cassette. This system not only enabled the tissue samples to be safely secured in permanent plastic cassettes but also allowed the specimen number to be hand written on one edge (Figure 1b). 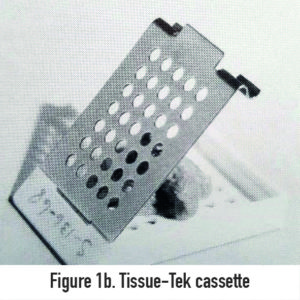 Since paraffin wax was first introduced as an embedding medium by Edwin Klebs in 1869, it has been used extensively as an infiltration and support medium for the sectioning of tissue blocks. Nonetheless, because of the hydrophobic nature of the wax, the requirement for tissues fixed in aqueous formalin to be dehydrated in alcohol and cleared through changes of solvent such as xylene still remains. In the early days, tissue processing would have been carried out by hand, but this was superseded by the introduction of the automated tissue processor around the middle of the 20th century.

With tissue transfer processors, the capsules or cassettes containing the tissue samples were placed into perforated baskets and the tissues transferred from reagent to reagent. This was carried out through a series of stationary reagent containers arranged in-line or in a circular, carousel arrangement (Figure 2a). Processing schedules were generally cut into notched discs and fluid agitation was achieved either by a rotary motion of the basket or by vertical oscillation. Although the original models were open, standalone types, more recent models had integrated fume hoods. Towards the end of the 20th century, fluid transfer processors had evolved in which the processing fluids were pumped to and from a sealed retort in which the tissues remained stationary (Figure 2b). These systems were totally enclosed, and filters were in place to absorb any vapours that arose from the processing reagents. 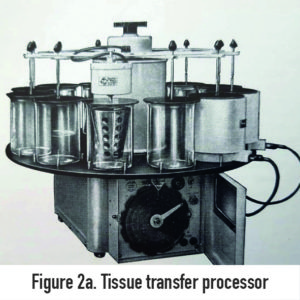 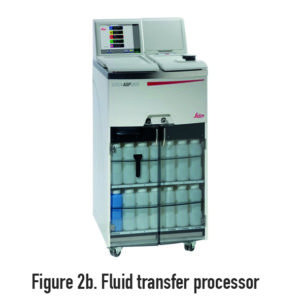 Once tissues had finally been infiltrated with molten paraffin wax, they were transferred to moulds for casting or blocking. This stage is more commonly known as embedding and over the centuries, various types of mould have been employed. In the distant past when hand-written labels were commonplace, glass or metal Petri dishes smeared with glycerine were utilized for embedding several pieces of tissue at a time. While paper boats were both suitable and cheap, glass test tubes and watch glasses were sometimes utilized although they often required breaking in order to release the tissue block. Although plastic ice cube trays were a useful addition, adjustable moulds in the form of Leuckhart ‘L’ pieces were popular at the time because they could be adapted to form an oblong mould which would suit any size of tissue sample (Figure 3). These moulds consisted of two ‘L’ shaped metal pieces (usually brass) which were placed onto a metal or glass plate. Nonetheless, whatever the type of mould used, molten wax would be poured into it and the tissue transferred from its capsule or cassette. Any accompanying identification label would be placed into position at the edge of the mould as the wax was solidifying. Once cooled, the tissue block would be removed and the excess wax trimmed off. The block and label would then be mounted onto a wooden chuck in readiness for microtomy using a hot iron or spatula to melt the wax (Figure 4). 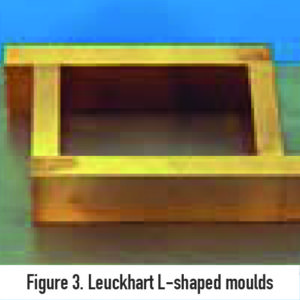 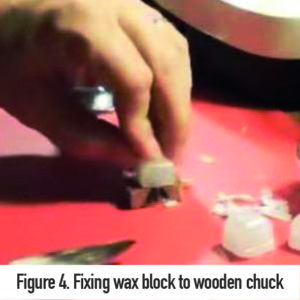 How times have changed!  Since the introduction of stainless steel moulds and tissue cassettes, the need for transferring hand-written labels during processing and embedding has been laid to rest. During the last fifty years, many changes have been made to consumables alone in the histology laboratory. From plastic embedding rings to colour-coded standard, mega and mothership cassettes, production of the paraffin block still remains the primary foundation for histological study. Even with all the technological advances that are present in the modern histology laboratory, the paraffin block remains crucial to its future success.