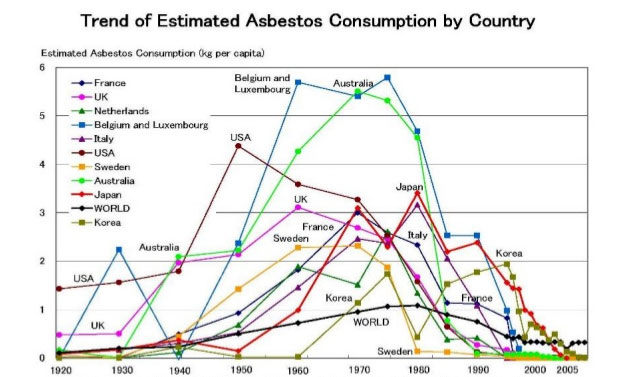 When the twin towers collapsed at the World Trade Centre on the 11th September 2001, lower Manhattan was blanketed in a mixture of dust and debris that contained more than a thousand tonnes of asbestos.

In the ensuing years, there was an unusually high death rate from cancer among the emergency workers who worked at clearing the site and thousands more are believed to be at risk. More recently, the hidden menace surrounded many a world leader as they attended summit meetings at the United Nations headquarters in New York.

During a two billion dollar reconstruction, the asbestos that was removed from the building was sufficient to cover a football field in blue dust to a depth of more than five metres. This work followed a previous renovation at their Vienna headquarters some years earlier which at the time was hailed as the largest asbestos removal site in Europe!

These buildings, like many others constructed after the Second World War, contained asbestos, and lots of it.

Famed for its insulation, heat resistance and affordability, asbestos was one of the most widely used materials in construction. Now, this mineral is scorned for its less illustrious links to asbestosis, malignant mesothelioma and other diseases that take decades to develop, are incurable and have a poor prognosis.

By far the most common form of asbestos is chrysotile or white asbestos, the only curved fibre type. Amosite (brown asbestos) and crocidolite (blue asbestos) are of the amphibole variety together with the non-commercial types known as tremolite, actinolite and anthophyllite. All these naturally occurring fibrous minerals have been mined extensively worldwide.

Indeed, it was this industry that gave the Canadian mining town of Asbestos its name. Once the largest of its kind in Canada, the Jeffery mine in the town has been disused since 2011. Prior to that date, Canada was one of the largest producers of asbestos in the world.

In Australia too, the town of Wittenoom was once a global leader in the mining of blue asbestos, regarded as the most dangerous form. At one time, a third of the population of the town worked at the mine and thousands of them died from mesothelioma as a result of inhaling the dust. Although the mine closed over fifty years ago, the ghost town north east of Perth is still home to a handful of residents who defied the government to move out.

And lastly, spare a thought for the residents of Libby in Montana, home to one of the worst man-made environmental disasters in American history. Many years ago, the owners of the vermiculite mine in the town believed they were doing the residents a good deed by utilising the waste products from the mine to build playgrounds and roads. The waste, however, was contaminated with tremolite asbestos and over a period of years, the toxic dust had killed hundreds of residents; many more are still at risk.

Following a Seattle newspaper article entitled ‘Uncivil action: a town left to die,’ the Environmental Protection Agency became involved and in 2008, the owners of the mine (who apparently were aware of the contamination) were ordered to pay 250 million dollars towards the cleanup. What followed was the largest and longest-running asbestos decontamination project in American history.

Asbestos mining ceased in the United States in 2002, yet current records show that in the last ten years, more than 4,000 tonnes of the mineral has been imported. Even after years of regulation, 50,000 deaths from mesothelioma have occurred in the USA since the turn of the millennium. In the United Kingdom, a total ban on the use of asbestos has been in place since 1999. Although it has been illegal for many years, asbestos is still present everywhere – embedded in our houses, hospitals, workplaces and schools. In reality, asbestos is probably killing more people in the United Kingdom than anywhere else in the world.

Actually, if asbestos is allowed to remain undisturbed in buildings, it poses little or no threat to health. However, the danger is significantly amplified during refurbishment or installation work in buildings that contain the mineral. If that work happens to be carried out while a building remains operational, then breathing asbestos dust can affect construction and personnel workers alike.

As it is virtually impossible to determine with the naked eye whether a workplace contains asbestos, it is always best to presume the presence of it until proven otherwise.

There is a duty to manage asbestos and that is directed at those who are responsible for managing the premises. Consequently, if remedial work is planned, then it must be ensured that those involved have the correct level of information, instruction and training for assessing and controlling the exposure risk of personnel to asbestos. There is overwhelming agreement that there are no safe levels for exposure to asbestos dust and as long as it poses a threat, people will continue to die.